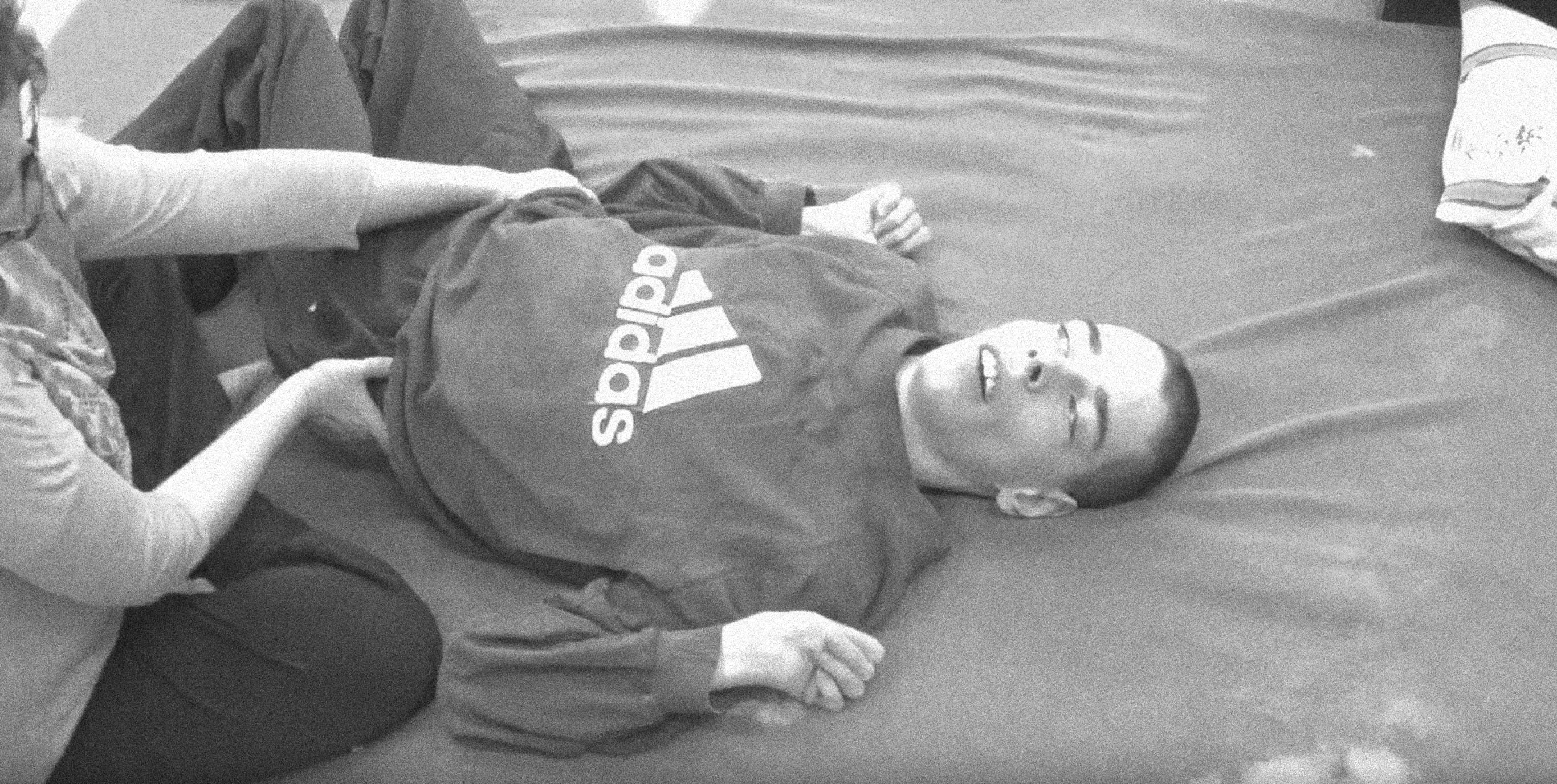 I met Andrzej in Pulawy at the Day Assistance Center where I was invited to show practically what are the functional integration lessons. Andrzej and his mother agreed to participate. I remember confidence Andrzej entered the lessons with. As his facial expressions changed from the initial distrust, through slight surprise, then disbelief, to full relaxation.

I also remember that Andrzej occasionally looked at Magda saying her name. As if he was checking if she looked and asking her silently to remember it.

Magda – she is Andrzej’s therapist and she really has lessons with him every day. So I just asked her for a comment on the films with Andrzej

He was born 13 weeks ahead of schedule, in extreme prematurity, weight 1200 grams with perinatal hypoxia. Two and a half months in the incubator. Since his birth he has psychomotor developmental disorder. Rehabilitated from the fourth month of life in the DSC in Lublin. The Vojta method was used without significant results. In the fifth month the diagnosis: cerebral palsy, pyramidal – extrapyramidal paresis. About age 10 months epileptic seizures appeared that are treated with anthiepileptic drugs with some improvement. Change of the method of treatment by Bobath method. Consultation and method of training in the DSC Lublin and consultations with a speech therapist and home education.

From the age of four, he attended three rehabilitation classes for 3 weeks at the Center for Rehabilitation and Education of Children and Youth with Disabilities in Rusinowice, where he had many procedures, exercises, hippotherapy and other therapies. He also had three seasons during the holidays with a group from Pulaw. At the age of 5 to 10 years, his father drove him to classes of hippotherapy, among other things in Kebl.
He has never achieved the ability to move independently and actively speak. Deep mental dissability.
At the age of 18, a scoliosis occurred. He wears a corset for the sacral and thoracic parts of the spine. Tensions in the hips and knee joints increase.
From the age of 6 he studies in home schooling. He loves these classes. He listens to records for children, teacher singing, books, he likes to listen to ambient sounds and he likes walks.

I have been working with Andrzej with Feldenkrais method for about a year. During this time, the boy has made progress, he smiles, often calls therapists to talk to them. When we do not pay attention, even though he calls us, his next step to attract attention is “spitting”. He does it on purpose, because he knows that we will certainly turn around or come to him. When I was sitting at the table, Andrzej was lying on the mattress, he raised his head, looked at me, smiled and called me. Andrzej changed during the year, became more open, relaxed. He moves his legs easily (like walking) and his hands, of course, as far as he can. You see that movement makes him happy. From time to time Andrzej himself shows how he wants to work. When we ask him (me or Ania), what we are practicing today, Andrzej raises a part of his body up and smiles. He sometimes takes over the initiative and does what he chooses, as a lesson.